3 May 2022 | Email | Print |  PDF
Ardagh Group has confirmed the completion of its acquisition of Consol, Africa's largest glass packaging maker by manufacturing capacity.
Luxembourg-based Ardagh Group is a global supplier of metal and glass packaging for brand owners around the world, and operates production facilities in multiple countries.

The Consol acquisition, for $1bn including net debt assumed in Consol, represents a significant inward investment for Ardagh into South Africa and other markets in which Consol operates, with further investment planned for two new furnaces.

Consol, headquartered in Johannesburg, and founded in 1944, is the market leader in South Africa where it operates four glass production facilities. It also operates smaller production facilities in Kenya, Nigeria and Ethiopia. Consol serves a broad range of international, regional and domestic customers, principally in the beer, wine, spirits, food and non-alcoholic beverage sectors.

Paul Coulson, chairman and CEO of Ardagh, said, "We are delighted to have completed this strategic acquisition. By combining Ardagh’s global reach with Consol’s know-how on the African continent, we are very well-positioned to partner with our customers to meet the growing consumer demand in Africa for premium, sustainable glass packaging.”

Ardagh Group said its acquisition of Consol will enable further opportunities for future investment in glass manufacturing in Africa. To this end, Ardagh is committed to a third furnace investment at its Nigel facility in Gauteng which will add to the existing N2 expansion project due for start-up in May 2022. These combined investments will total R3bn ($200m) and create more than 250 direct jobs, with significant ancillary supply-chain expenditure resulting from these projects.

Bruce MacRobert, former chairman of Consol, has become chairman of Ardagh Glass Packaging Holdings Africa (Pty) Limited. He commented: “Ardagh’s investment in Consol and in the expansion of glass production in Africa is testament to Ardagh’s faith in the Consol team and in Africa’s potential.” 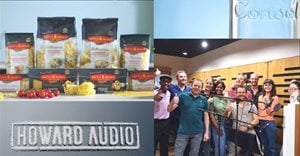